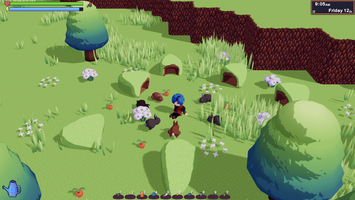 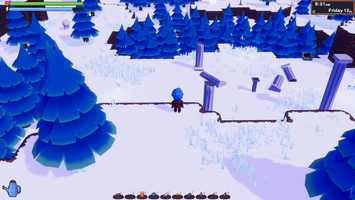 It's been forever since I made one of this, so some stuff might be missing, but here is the list of what I can remember.

Improved the layout and moved around a bunch of stuff.

Moved around a lot of resource spawn points.

Reworked the visuals of a bunch of enemies, improved some AIs and rebalanced all enemies to be slightly weaker.

Made minor changes to several areas but nothing significant.

Improved the visuals for all grass.

Most areas should load slightly faster, especially the garden.

All craftable items (but not equipment) is now fully implemented.

A lot of usable items have new particle and sound effects.

Item storage was increased to 50 per page instead of 40.

Added a new weapon type - Boomerang. It is a medium ranged weapon that can hit multiple times.

Removed all alcohol from the game and replaced it with various other drinks. The effects are still the same minus being able to pass out drunk.

Rebalanced many enemies and adjusted drop rates so some items are more common.

Added minibosses. Some enemies can spawn as a rare miniboss type. These are much tougher but drop more items including some unique to minibosses.

Went over many enemy attacks to make them more deadly. Status effects in particular are more dangerous now.

Have been slowly going over NPCs and finalizing them.

Bernadette has much a lot of new dialog, many randomly spoken lines and many cutscenes. It is possible to max out her friendship.

Wayland also has a lot of new dialog, randomly spoken lines and more cutscenes. It's not possible to max out his friendship yet because I was lazy.

Added many new animations for NPCs. Mostly for Bernadette and Wayland right now.

Slightly improved the looks of a few NPCs.

Improved many particle effects for weapons and status effects.

Changed how interacting with things work. Should be easier to water the correct plant now.

Other than bug fixes and changes so small I cannot remember, I think that is everything!