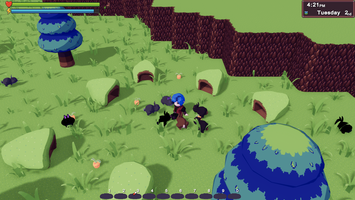 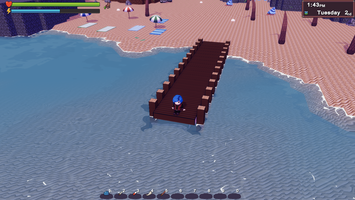 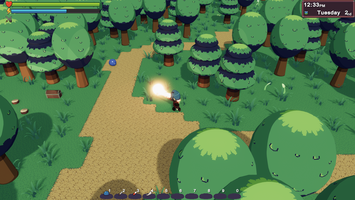 Henlo! There have been many new progress since last demoday. Here is some of it!

I've removed leveling up by defeating enemies to gain experience. To become stronger now the player must put items into the Greedy Greedy Pot. Items added to the pot will be consumed but grant a small, permanent stat bonus. If a category of items is completed, it will unlock a passive ability.

There is a small event/tutorial to give the player the Greedy Greedy Pot and explain it's usage.

I've increased the quality of many things in the game. These are mostly graphical and some are still underway. Here is a full list (I think)

Particle Effects for all weapons and items have been remade to look fancier and have nicer sound effects.

Some enemies have been entirely remade. This means new appearances and improved AIs as well as improved particle effects.

A lot of textures for terrain has been improved. The textures have a new colour palette and are higher resolution.

There is a new, better looking water shader.

The UI has new graphics.

The loading screen looks nicer and has more hints.

Added a sprinting animation. If the player uses an effect that increases movement speed they will sprint now instead of run.

A few areas have been changed to make them more interesting. Mainly Gaileed Plains has a transition to the swamp area.

Interior walls have been cut down to improve visibility.

Damage numbers look nicer. Instead of each element having a different text colour, if you hit an enemy with an element it is weak to there will be an exclamation mark after the damage. If the enemy is resistant to an element, the damage number will instead be greyed out. Every element has it's own hit particles now though.

There is still a lot of work to be done on improving quality however.

There is version checking now. If a save file is incompatible it will not appear and cannot be loaded.

Can only be accessed from the title screen at the moment.

The player can change screen resolution, enable/disable full screen, change volume levels and a few other in game options.

At the moment only 16:9 resolutions are supported.

Added more generic NPCs, especially early on in the game to increase NPC variety. Named NPCs also have spawn requirements now and some will spawn more or less often depending on a variety of factors.

Most NPCs have more starting gold as well.

Enemy AI has been changed slightly. It's still a work in progress however.

Enemies have a more obvious backswing now, so there is more time to dodge attacks.

Enemies have slightly randomness in when they attack so the player needs to pay attention to animation cues when dodging.

Additionally many enemies have some hesitation states where they may circle the player, back up or try to look aggressive instead of attacking. Due to this enemies will attack less often in general, but will hit harder if they land an attack.

All enemies and NPCs have new pathfinding. It should be smarter and more efficient, but some NPCs may be acting strangely right now since I didn't bother going over all of their routines to change them for the new pathfinding. I'll get round to this one I work more on NPCs.

All weapons have slightly adjusted damage based on the range/AOE of the weapon.

The spacebar is used to dodge now.

Don't ask me what this has done. Supposedly it fixed some bugs and will make the game run better. Don't quote me on that.