Updates since the last demo! 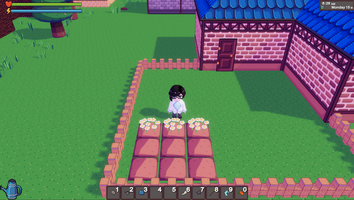 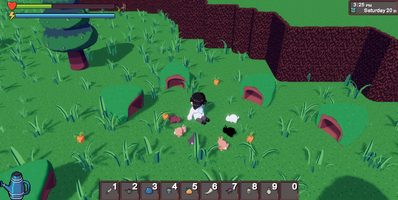 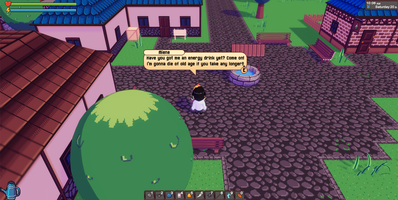 Items can be given as gifts to NPCs now. At the moment NPCs are neutral to all items but at some point in the near future they will all have a list of items they love, like, dislike and hate.

You can give them one gift per week which should make it easier to befriend them.

I added an actual title screen to the game. It has nice little UI animations and stuff and even loads in any characters you have made and has them take part in the title screen it's self.

I think it looks nicer even though the game still doesn't actually have a title.

The animations for spears sucked, so I removed them and replaced them with maces, which are much easier to add attack animations for.

With this I also went over all melee weapons and made them slightly more unique. Swords have fast, wide range attacks but lack power, axes are strong but slow and maces have very high knockback power but the shortest range of melee weapons.

I added about 30 generic status effects, things like poisons, bleeds, debuffs and so on.

I also made them somewhat more uniform. If you get poisoned, you know it's going to do a small amount of damage every second for a long time. While something like pain will increase all physical damage you take by 33% for a long while.

These all have particle animations to indicate the effect was applied as well.

And I also went over all enemies in the game and made it so a lot of them can inflict some type of status effect.

I replaced all (or almost all) of the assets used by harvestable materials. They're no longer 2D planes but actual 3D meshes. I think I still to replace the assets of a bunch of plants that can be grown however.

With this I also replaced all grass with 3D meshes, hopefully this wont tank performance.

I changed a few textures in the game as well, either to make to make details bigger and bolder, or to remove visual noise that a lot of textures had.

Chat bubbles are also a nice gradient now instead of being a solid colour.

Many small assets have been remade as well. I'm still not a great artist but I'm gradually improving and as I do old assets will be replaced or improved.

Speaking of which, several enemies have been stylized some. This is also an ongoing process as I get better at art, but bats went from being little more than a grey, vaguely baterang shaped plane, to being a real 3D mesh with discernable details like ears and teeth, they're also a nice dark blue colour.

Finally I worked on the colours used in game a little. Things should be less harmful to the eyes now.

I touched up a lot of areas in the game. In particular I went over where enemies spawn a little and also improved the placement of harvestable ingredients, most are placed more densely now.

I slightly changed the layout of the forest area as well. It's ever so slightly smaller now but not so much you'd have noticed without me mentioning it. At some point I intend on going over a few other areas and making them smaller too. Hopefully these two things will make the game and it's areas less empty.

Additionally, I've restricted access to the Plains area (and by extension the valley and swamp) initially. The forest was always suppose to be the starting area in the game this should make that more apparent.

What is next and stuff

The first major change I will be making is to remove leveling up in the game, which was always suppose to be temporary, and replace it with a system where the player is required to use crafted items to become stronger. How exactly this will work needs to be finalized, but you will craft and sacrifice items to become stronger, with higher quality, or more difficult to craft items granting larger bonuses.

At some point, I will probably begin work on the last major area in the game, which is going to be a volcano accessed from the cliff area. It'll be a very dangerous area with the strongest enemies in the game with lots of environmental hazards.

At some point, probably after the volcano area is finished, I want to go over all old areas in the game and spruce them up some. The plains map needs to be made smaller with less empty areas, the cliffs just needs reworking entirely and every area would benefit from lots of small, visual improvements.

As well as improving areas, I want to improve area bosses. At the moment most are just tougher enemies with a slightly larger variety of attacks. I'd like to give every boss a distinct attack pattern that involves player learning and skill rather than just getting higher stats until the boss becomes easy enough to kill.

The codex needs some work too. It more or less works as it is, but the plan is to add more information about ingredients to be learned. Rather than telling the player a certain material can make healing items for example, I'd like for them to eventually be able to learn how strong and difficult it is to use as well. I don't want to give players exact figures, just some visual way of showing this information, maybe as stars out of 10.

The UI could use some work too. I'm fine with the over all layout of most windows, but I dislike the colours used. I really don't want to use a really generic beige colour background with brown borders either, but the dark grey with brown border is just starting to look less and less attractive by the day. UI scaling is something I need to work on as well. The UI is fine for most resolutions between like 1280x720 all the way up to 1920x1080, but above this things might start looking a bit small and at 4K resolution I'm sure the UI looks tiny (not that I can run the game at 4K to see).

I'd also like to improve the player run shop a bit. The first thing I'm going to do is add some conditionality to the appearance of named NPCs visiting. This'll be easy enough to do, but at certain points in time, or at certain friendship levels I want named NPCs to be more or less frequent. I'm not sure how, but I also want to add some kind of way of indicating when the shop will receive no more customers for the day.

I need to go over the request system and make it easier to solve them as well. My solution for this is simple, if the player has crafted an item previously and a NPC requests that item, rather than the request saying "bring me something", it will simply state "bring me this exact item". I'd also like to make requests time limited with shorter ones having increased rewards.

Home furnishing needs some improvements as well. I have the foundations in place already, but I'd like to add flooring and wallpaper that can be changed for each room in the players home. Naturally adding more furniture is always something I'll look to do. I'll also increase furniture price in the furniture shop at some point, and probably limit the selection available as well, probably to something like 5-10 randomly selected furniture sold per week (plus 1-2 floors/wallpapers), based on friendship levels with Bernadette. This way the player wont have a huge list of furniture to browse through, and will have to play for a while to see all the furniture in the game.

Adding more NPCs and reasons to keep playing is also a long term goal. I'm a bad writer but the end goal is 30-35 NPCs each with 6 friendship levels that each have their own dialog, events and small story line. Once I get every area in the game finished, I can start putting some major work into this. The systems are all in place, it's just a matter of writing being by far my weakest area.